Hey guys, after all the requests and DM’s, I thought I’d put together a guide for those of you who want to QC your own Supreme box logos hoodies or crewnecks. Keep in mind this guide is meant to help you QC your bogo to determine whether it’s a replica or retail and to determine it’s flaws. I’ve added photos to help you do a rep vs retail comparison side by side.

Because Supreme box logo tees are easy to QC (they’re just a screen-printed graphic slapped onto a tee, for the most part), this guide will only focus on hoodies and crewnecks. I will keep updating it as time goes and new box logos come out.

Number one thing to keep in mind when looking at a box logo, is that all bogos are different, even retails. Supreme quality control is always changing over time – sometimes it’s good, and sometimes it’s terrible. FW18 for example was far superior to FW17, and FW16 was better than both were. There are no two box logos that will look the same – they all have small differences here and there, so even if your box logo doesn’t look exactly like your friend’s, or the one on StockX or Grailed, or the one you see online on Facebook groups, don’t worry about it. Also, this guide will NOT focus on the tags.

Notes before you start

Here are a few things to note before you start QCing:

Finally, keep in mind that the QC photos are close-up magnified shots. This is how you typically spot the flaws. Most of the very small details you’ll see on those pics, you wouldn’t actually be able to spot with the naked eye, and neither will your neighbor, or your friend who’s “really into Supreme and can LC everything” Get real; nobody LCs stuff in reality or gives enough shits to look at your box logo up close.

Now onto the QC part.

The box logo patch should not look soft and foldable. The material and consistency of the stitching is harder, and the texture is not typically pliable unless we are dealing with a very worn out and used box logo. There’s no exception to this. Also, there needs to be an equal distance between both the left and the right sides. You can eye-ball this by seeing whether the left side corresponds to the right, but do not lose sight of the middle as sometimes it fluctuates. Some of Mirror’s black FW16 reps have had this issue, where they were thicker in the middle than on the sides and created an uneven box logo patch.

When you look at the patch, ask yourself:

The box logo patch should be cleanly sown into the fabric of the hoodie without any textile shredding. Shredding is when you can clearly see the thread between the hoodie and the patch sticking out, or grinding against the fabric. Some box logos have it more than others: the FW17 ones are commonly known for not having the best sown patches (green, purple and brown box logos being the most noticeable) and a fair bit of shredding. This is typically most noticeable through a zigzag of the thread going in between the blank and the patch.

The box logo grain should always follow the crisscross pattern, regardless of the season it dropped in. Some seasons (such as 2013 and prior, as well as FW16) it’s more pronounced. Other seasons, it’s a little bit less (FW16 and FW18). Nonetheless, you need to clearly identify the diamond shaped holes in between the fine fabric of the grain.

The pattern involves a clear X stitching all across the box logo patch, onto which the letters are sown later on. It should have just enough thread to make up the texture, but not too much, otherwise it becomes too patchy. The thread used to stitch this grain needs to be fine and medium in thickness as to allow for the crisscross to show the gaps in between.

Finally, look for a grain that has depth. There is a certain crispness about retail grains that you’ll notice reps almost never have – they are less surfaced and a bit more sunk in, with higher detail. Oftentimes, reps will have a very surfaced grain despite having a crisscross pattern, and in that case it’s still wrong.

When you look at a box logo grain, here’s the questions you have to ask yourself:

The most important part of a replica box logo, so to speak the make or break, and the number one tell (number 2 being the wash tags). Despite the letters being a bit different from one season to another, they are all relatively consistent in the volume they consist of, and the flatness. A lot of replica box logos will have letters with more, fuller volume to them, and a certain shine that retail doesn’t have. Many reps will also have letters that are almost silver or grey instead of pure white, which is how every retail is.

Spacing between the letters needs to be very consistent. There should be an equal amount of space between the bottom edge of the box logos and the letters, and same is applicable to the top. Make sure that the threading is not in a zigzag but rather a clean side by side.

Here’s what you should assess when you look at the letters:

The box logo patches on the Supreme x CDG split hoodies aren’t sown but rather printed. Yet, these are the most flawed box logo replicas so far, and very few out there have produced batches that are actually good.

The box logo, cut in half, needs to be even on each side in terms of size; the right size shouldn’t be bigger than the left, or vice versa. They need to sit at a good distance (approximately half a box logo distance) between each other. The cut in the middle has to be mild and not sink in the box logo halves.

The most important thing about this box logo, and its biggest flaw, is the R split. Make sure that the right half has just enough space between the pole of the R and the end of the split. It needs to look like a clearly cut ‘r’, not like a ‘l’. On the left half, the ‘r’ needs to show just enough so you can tell that it’s the missing piece from the above – it shouldn’t be too long or too short, too high or too low.

Text on the lower back

The “COMME des GARCONS SHIRT” text and cut angle on the lower back should always be the same regardless of the size of the hoodie. There’s a few things that have to check off:

This one is very simple: QC it the same way you would a regular box logo, only the letters are flipped. The letters are supposed to be about as thick as FW16, so if yours are too thin, or too thick, don’t buy it.

One thing to keep in mind is that the polka dots are different on each hoodie – it’s a pattern that is randomized. The dots do not sit in the same spot on the retails either. Some pieces have dots under the box logo, some have the dots around it. As long as they follow the same general pattern, you should be good.

Another very simple box logo hoodie to QC – the main flaws on it is the ME in COMME. The retail version has a small bridge between the M and E that connects both together. Reps don’t. To my knowledge, there’s no batch without the flaw, so you’ll have to get one with that flaw and deal with it to the best of your abilities. Also, make sure that the color saturation is right – the red needs to be bright, and not too washed out. Sometimes reps either get the red too bright or not bright enough, and besides the tags this is typically the easiest way to tell a replica from a retail. Also, this is one of the only box logo hoodies on which the screen print is almost the exact same as it appears on the tee.

Note that whether you get the white or black variant will also play a role in how it looks. Red contrasts differently against a black background than it does against a white one. It will look darker against the black, and much lighter and paler against the white.

Keep in mind, once again, that this guide is meant to generalize based on overall consistency of box logos. Just like any bell curve, there will be some that are outside of what’s “normal” for box logos – some will have a good grain but will have crappy letters and still qualify as good. There are retail box logos with poor quality control, stitching flaws, bad grains, mis-stitched letters, and incorrect spacing. There’s just not a lot of them. So, the general consensus stands that they should look a certain way rather than another. This is what I’ve aimed to help some of you with by having put this together.

Courtesy of Reddit User u/BarakudaB, used with permission. Don’t hesitate to DM u/BarakudaB on Reddit or tag him in posts for help. 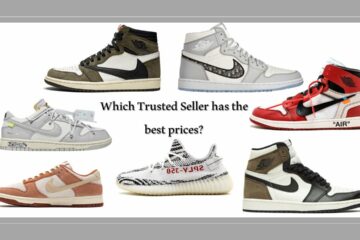 Sneaker Price Comparison: Which Trusted Seller has the Best Prices?

In r/Flexicas’ top post of the month, u/Powerful-Farts had a few ideas how we can compare the most popular trusted sellers for sneakers. We got permission to post it as part of our “best of Read more…

How to NOT Overspend on Taobao

Everyone can imagine that RepArchive lives from Taobao and Weidian hype, and that we want as many people buying as many items as possible. But we also have a responsibility. That’s why I decided to Read more…

Best Batch and Links for each Sneaker on the Market

This list is heavily based on u/Cactus–Jack’s famous Flexicas List that’s been the go-to resource for thousands of customers.